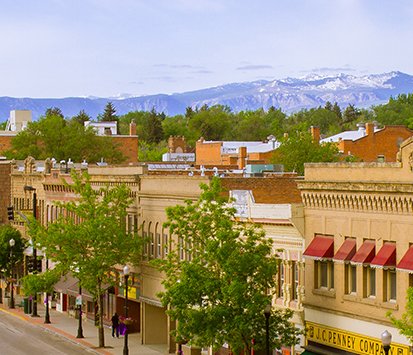 Sheridan is a city in the U.S. state of Wyoming and the county seat of Sheridan County. The city is located halfway between Yellowstone Park and Mount Rushmore. It is the principal city of the Sheridan, Wyoming, Micropolitan Statistical Area which encompasses all of Sheridan County.

The city was named after General Philip Sheridan, Union cavalry leader in the American Civil War. Several battles between US Cavalry and the Sioux, Cheyenne, Arapaho, Shoshone, and Crow Indian tribes occurred in the area in the 1860s and 1870s before the town was built.

In 1878, trapper George Mandel built a cabin on Big Goose Creek, reconstructed today in the Whitney Commons park near the Sheridan County Fulmer Public Library. Jack Dow surveyed the townsite for Sheridan in 1882, at the behest of John Loucks, first mayor of the town who had served under Gen. Sheridan.

In the early 1880s, the nearby town of Big Horn was larger in population. In 1888, Sheridan County split off of Johnson County, and voters chose Sheridan as the county seat in a run-off election. The arrival of the Burlington and Missouri Railroad in 1892 boosted Sheridan's economic status, leading to the construction of the Sheridan Inn, where Buffalo Bill Cody was once a financial partner. Railroad maintenance facilities and railroad-tie treatment plants were significant employers in Sheridan's first decades. The railroad created numerous side industries as well as export opportunities for raw materials. Maps of the day show Sheridan as part of the "hinterland" providing raw goods to cities like Chicago.  For the next twenty years the economy and population boomed.

Numerous coal mines funded by Chicago investors opened along Tongue River north of Sheridan in the 1890s, sparking immigration, and a major building boom that built Sheridan's brick downtown district. By 1910, an electric streetcar line, one of the only in the state, connected the mining towns of Monarch, Dietz, and Acme to Sheridan.

Sheridan was initially settled by farmers from midwestern states like Illinois, and a few people who came up the cattle trails from Texas, like John B. Kendrick, who went on to be a cattle tycoon and Governor of Wyoming. Many immigrants from Poland, Italy, Greece, Germany, Mexico, and Japan settled in Sheridan, finding work in coal mines, railroad, or agriculture. One notable Muslim immigrant was Zarif "Louie" Kahn, a charismatic Afghani tamale and hamburger vendor from what is now Pakistan whose neighborly generosity is still remembered in Sheridan.

Agriculture played a major role in Sheridan County's early economy. By the 1920s, Sheridan was an agricultural processing center for wheat, dairy, and sugar beets, with a stockyard for cattle shipping by rail. Many hobos rode the rails to Sheridan in the 1920s and 1930s, seeking employment in agriculture and ranches.

The role of underground coal mining declined in the 1950s when demand for coal to power steam locomotives declined due to adoption of diesel locomotives. As coal mine towns dwindled, many employees moved into Sheridan and found other lines of work. The economy boomed in the 1970s with the construction of strip mines along Tongue River in Montana. Many subdivisions were built on former small farms outside of Sheridan in the 1970s and 1980s as the dairy, wheat, and sugar beet industry consolidated to other areas in Montana and South Dakota with more production capacity.

Tourism has long been a significant factor in Sheridan's economy and community life. Numerous guest ranches including Eaton's Ranch hosted guests that arrived by rail. Books like Diary of a Dude Wrangler and Hell Among the Yearlings document this history. Many dude ranch guests moved to Sheridan permanently, leaving a lasting influence on the area's economy, cultural life, and charity institutions. Today Sheridan has a number of local educational and community foundations, and almost 400 non-profits. Notable community-funded entities include a large Y.M.C.A. recreation center, and the WYO Theater.

In the 21st century, Sheridan is the economic center for a large area spanning three counties in north-central Wyoming and southern Montana. The town has a relatively diversified service economy — including government, healthcare, education, real estate, mining, and financial services, with a growing manufacturing sector — in contrast to many communities in Wyoming that rely mostly on natural resource extraction, government jobs, or national park tourism.